In 2022, Alece Takaoka will hold a film festival to promote art and expression activities by youth.
This film festival will consist of two main programs: "filmmaking workshops" and "film screenings.

A film festival will be held where short films made by the youth in the workshops will be screened along with professional film productions for a large audience.

ー​Films to be screenedー

A self-documentary that follows the emotional process of rebuilding a family, that is part of a culture of family separation known as the dekassegui phenomenon.

A short film produced by high school students of foreign/Japanese roots in Toyama Prefecture with the cooperation of the filmmaking group "KUZOKU".

"Saudade" and "Bangkok Nights"!
Buddhism and the post 3.11 Japan

​ The boy and the World

The journey to find his father eventually leads him to his homeland, Brazil, and the question of what it means to live.
All hand-drawn animation with no dialogue.

Towards the festival
​ Crowdfunding is in progress!

Many CLD youth have the ability to perceive things in a relative way through their experience of <migration> between languages and cultures and have a variety of problem consciousness, opinions, and thoughts.

However, within the framework of Japanese society and school education, their abilities are measured only by the language scale of "Japanese," and their inner awareness of issues, opinions, and thoughts are not always fairly evaluated.

The accumulation of such experiences has made them hesitant to express themselves.

Alesse Takaoka believes that art is an equal and effective means of expression that does not put CLD youth at a disadvantage due to differences in the mother tongue, culture, etc.
We have turned our attention to "movies" as one of these art forms.

Films with images and stories appeal directly to each and every one of us, transcending differences.
We also believe that film is a medium in which CLD youth, who speak several languages other than Japanese, can take advantage of their strengths.

Through the expressive activities of the film festival, we hope that all youth will grow and develop their potential through equal discussion and cooperation. and cooperate with each other on an equal footing, and to develop their wonderful potential and the future of the region and the world.

Teaming up with a professional film production team, youth from diverse backgrounds such as nationality, mother tongue, culture, and religion will produce a short film together.

What do children from Brazil struggle within Math?

An online workshop What do children from Brazil struggle within Math? ~ Differences in education between Japan and Brazil ~ was held on...

For the film festival
We held a movie screening to get in touch with the movie! 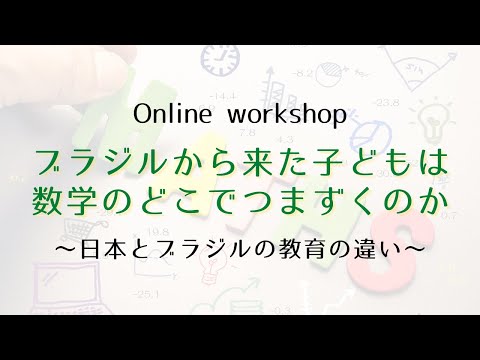 What do children from Brazil struggle within Math?

An online workshop What do children from Brazil struggle within Math? ~ Differences in education between Japan and Brazil ~ was held on...